Angela Merkel is named 'Person of the Year'. Honoring her, let's look at the arms of her native place, Hamburg.

I haven't found a blazon for it in English, and I don't know German, so let's give it a shot. What blazon would you give it?

Arms: Gules, a triple-towered castle, gate closed, the outer towers topped with a mullet of six points and the central tower topped with a cross, all Argent.
Crest: a plume of six ostrich feathers Gules and Argent with three peacock feathers Proper
Supporters: two lions regardant on a compartment Or

Coat of arms of Hamburg - Wikipedia, the free encyclopedia 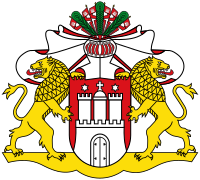